About two weeks after Pope Benedict XVI vacates the papacy on February 28, the College of Cardinals will elect a new Roman Pontiff. These Cardinal Electors (117 in all) will come from around the world to meet in a Conclave famous for its white smoke/black smoke method of communicating election results to the outside world. In spite of the Cardinal Electors’ geographic diversity, Catholics worldwide will not be equally represented in the election. Some countries will have a disproportionate share of the vote as measured by votes per Catholic parishioner.

The scatterplot below shows the relationship between a country’s Catholic population size and its voting share. 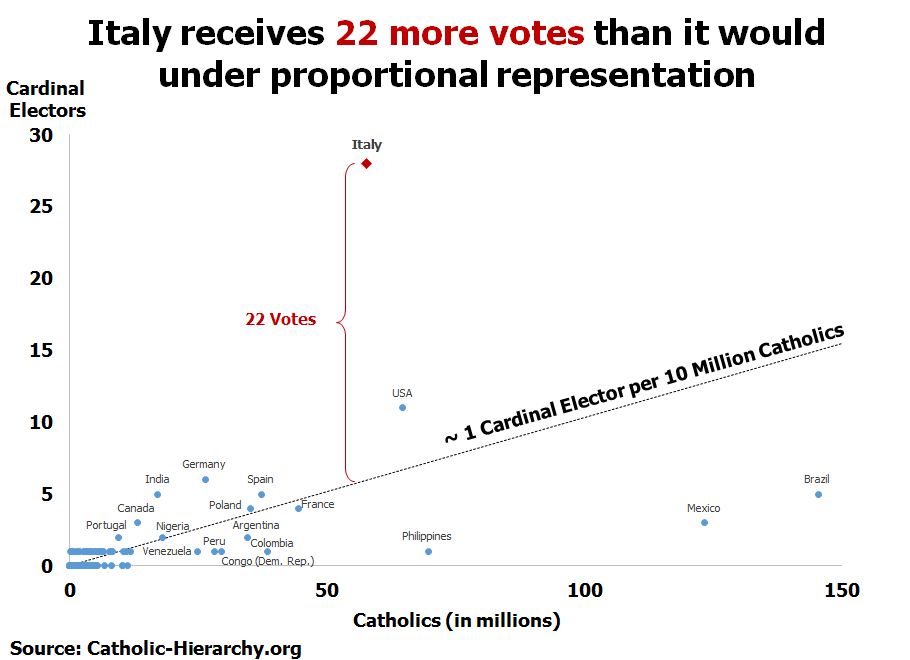 Unsurprisingly, countries with more Catholics tend to have more votes in the Conclave, with an average of 1 additional vote per 10 million Catholic parishioners (as represented by the dashed line). Nevertheless, several countries deviate significantly from this trend, with Italy receiving far more votes (28) than would be proportional to its Catholic population (approximately 6). Other notable deviations include Mexico and Brazil, both of which receive 10 fewer votes than they would have in a proportional allocation of votes. The US, another deviation, receives 11 votes while its Catholic population would suggest 7 votes.

Italy’s overrepresentation should not come as much a surprise when we remember Italy’s intimately intertwined history and geographic proximity with the Catholic Church and the Vatican in particular. Italy’s vote share has ranged from a high of 56.3% in 1903 to a low of 17.1% in 2005. Recently, however, Italy’s vote share climbed back to 24% in the current Conclave. Given this influence, we should not be surprised that (i) the vast majority of the Church’s Popes have been Italian, and (ii) many of the current favorite papal candidates are also from Italy.

Permanent link to this article: https://betweenthenumbers.net/2013/02/some-catholics-will-be-much-better-represented-in-the-upcoming-papal-election/