In a reversal of predictions, typing has replaced speaking

According to a recent article in Canada’s largest national newspaper, students and young adults have not become worse writers since the advent of new(ish) technologies like text messaging, Twitter, and Facebook. If anything, says the article, writers have become better over time in part thanks to new opportunities to write and create with these new media. To substantiate this claim, the article cites “some hard data” published by Stanford’s professor of writing and rhetoric, Andrea Lunsford. The Lunsford study examines college Freshman Composition papers from as early as 1917 through 2006, in four rounds: 1917, 1930, 1986, and 2006. For each of these years, Lunsford reports data that might suggest aspects of writing quality, including the average paper length and the average error rates per 100 words. Lunsford reports these years because they are the years in which either she or previous scholars examined samples of student writing. As the chart shows below, Lunsford asserts that (i) student writing is no more error-prone than it was nearly 100 years ago, and (ii) students write significantly more words per composition. 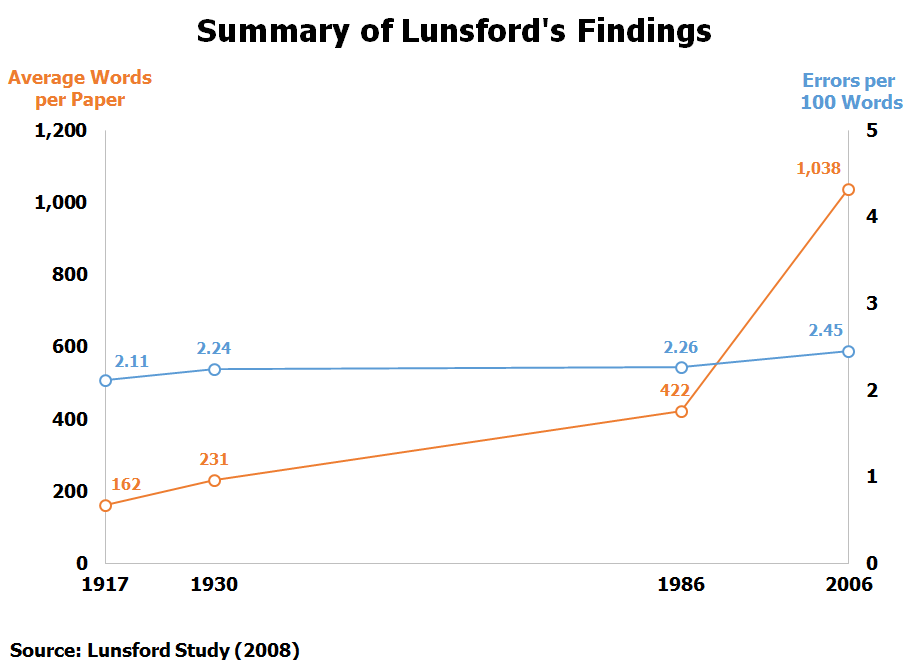 For the above reasons and more,the study cited is poor support for the claims in the associated article.

Permanent link to this article: https://betweenthenumbers.net/2013/09/why-cataloguing-thousands-of-essays-still-doesnt-tell-you-whether-student-writing-has-improved/