Whistleblower Program to Pay Big on Late Report from Overseas

Should The Elderly Be Paying More for Movie Tickets? 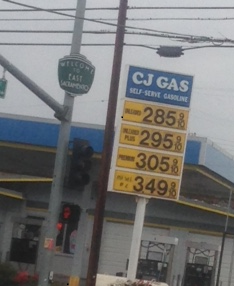 With the national average for ’87 octane descending below $3 a gallon, American drivers are paying less at the pump than they have since the beginning of the Great Recession (in terms of seasonality price, the current average is the lowest since 2009, in terms of absolute pricing, an average gallon of gas hasn’t been this cheap since December 2010).

Many commentators are quick to assert that this historic drop-off in the price of oil, and thus the price of gasoline, is due to the prolific increase in US oil production; a phenomenon driven by the newly economical methods of extraction, namely hydraulic fracturing and horizontal drilling. This viewpoint however does not capture the full plethora of factors that have led to the current reduced price for both oil on the world market, as well as gasoline at the local consumption level.

Significantly, oil is a global commodity whose price is set by aggregate supply and demand.

What this means is that oil and gasoline prices are only marginally affected by changes in domestic energy production and consumption. This is due to oil’s easily transportable nature (which in economic jargon translates to “low transaction costs”). A barrel of oil can so easily and cheaply be transported from Saudi Arabia to China, or from Venezuela to the US (or vice-versa) that the price a producer charges (for a specific quality of crude) as well as the price a consumer is willing to pay varies almost insignificantly. Thus there is a singular global market, and global price, for crude oil. Therefore for increased US production to effect the price Americans pay at the pump, the increase in supply has to be so great that it effects the global aggregate supply.

So then, if increased US production is only a small factor, what is pushing prices down so acutely? The primary culprit is lower than expected demand in China, and to a lesser extent, reduced demand in Europe. While the Chinese economy continues to grow, it is doing so at a slower than expected pace, with GDP growth estimated at <7.5% for 2014 (a far cry from the double digit year-over-year increases seen in the early 2000s, and again for a short period during the 2009-2010 economic recovery). As a newly blossoming manufacturing heavy economy, Chinese economic output is highly energy intensive. Thus, as Chinese growth slows, so does the aggregate demand for oil, which results in both the global price of oil and ultimately the price Americans pay at the pump, falling.

Europe, struggling to fend off a second recession, is also a contributing factor to diminished demand.

Declining global demand, combined with an uptick in global supply (caused by increased US and Canadian production, as well as surprisingly stable output from the Middle East) has led to a dramatic drop in crude oil prices (from August to November 2014, WTI Crude fell 20%). 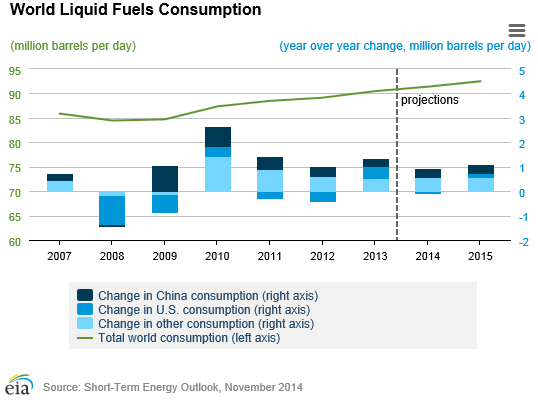 The forces described above are short-term in nature, but fuel prices are also affected by long-run shifts in consumption trends, spurred on by years of price volatility in the energy markets as well as at the pump. Gasoline is the textbook example of a commodity that is highly inelastic in the short-run, but somewhat elastic in the long-run.  Within a relatively short time horizon (one to two years), individuals and firms have little flexibility in their consumption habits. When the price of oil and gasoline goes up, one may want to drive less, or a company may want to minimize its use of petroleum inputs, yet consumers still have to get to the places they need to go, and firms still need to maintain output levels or risk getting overtaken by the competition. Thus both firms and individuals begrudgingly continue to purchase the same (or nearly the same) amount of gasoline for their cars, and oil for their factories, regardless of the price increase. The story changes over a longer time horizon, where planning allows for greater flexibility through use of new strategies or technology.

This multitude of influences is what makes prices difficult to predict.

Permanent link to this article: https://betweenthenumbers.net/2014/11/the-multi-faceted-explanation-behind-the-current-drop-in-gasoline-prices-across-the-us/