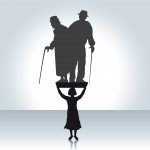 Bernie Madoff’s Ponzi scheme shocked the nation.  Initial estimates of missing client money were around $65 billion. A court later declared actual client losses of $18 billion. Many characterized the scandal as the biggest Ponzi scheme in history.  Of schemes that have already collapsed, the characterization might be true, but to call it the largest in history misses a behemoth in plain sight. The “biggest Ponzi” award goes to the U.S. Social Security Administration (that is, if we look past Medicare for now). If the Social Security system dissolved today, U.S. citizens would be out $17.5 trillion, the present value of Social Security’s unfunded promised payouts. Sorry, Bernie, you lost by a long shot.

Budget fights and presidential debates guarantee that none of us will escape 2011 without an earful on Social Security. And its no wonder. People born in the 1940’s are now qualifying to obtain Social Security benefits. Generally speaking, the baby boomers have never seen a paycheck go untouched by Social Security. They were born after the system was already in place. They collectively bought into it at the ballot box and after a career’s worth of contributions, the same generation is now fearful of cuts to their long promised benefits. On the flip side, many in the younger generations now paying into the system have little expectation that it will exist when they retire.  A U.S. News survey concluded:

Only about a third (35 percent) of Americans expressed confidence in the future of Social Security. Faith in Social Security is lowest among young people between ages 18 and 29.”  (U.S. News, “Survey: Workers Concerned about Social Security’s Future”)

Some proposals want current earners to pay even more to keep the system afloat. To keep pace with promised benefits, they must pay more into it.  The Fiscal Year 2011 budget states: “Outlays for Social Security benefits will begin to exceed its dedicated revenue stream over the next quarter century putting pressure on the overall budget” (US Budget 2011, Analytical perspectives, p. 5).

Social Security is characterized on Socialsecurity.gov as “a ‘pay-as-you-go’ system or one that (is) partially advance-funded.” This means benefits are to be funded from current or recent receipts (as opposed to being financed with contributions made long ago or with debt). Stated differently, in order for one generation to realize the benefits that enticed them to buy into the system, new generations must pay into the system as well. Without new recruits, the system dies, unable to fulfill promises to those who have long made contributions. In this way, Social Security is like a Ponzi scheme, similar to Bernie Madoff’s shocking scandal.

Investigators have said they determined that Mr. Madoff made no trades for at least 13 years. Instead, he allegedly took in money from a network of feeder funds and investors and used it to meet any withdrawals his investors requested.”

This pay-as-you-go system worked nicely as long as Mr. Madoff successfully encouraged sufficient new investment to bridge the gap between (i) actual investment returns and (ii) the account withdrawals his clients requested. When the economy suffered, the Great Recession and Mr. Madoff could no longer encourage sufficient new investment, his scheme collapsed. Mr. Madoff issued reports on the amount of wealth that had supposedly accumulated in client accounts (as high as $65 billion), but the reports were fabrications. The wealth and fanciful returns were vastly overstated.

But what about the “Social Security Trust Fund”?  The name “trust fund” is both deceptive and ironic. It is neither a fund (in the sense that it contains real assets), nor does it inspire much trust. One commentator, writing for Forbes, described the fund as a collection of IOU’s, written out by the government to the government. He states:

The problem is that by law 100% of these ‘assets’ are invested in Treasury securities. Therefore, the trust fund does not have any actual resources with which to pay Social Security benefits. It’s as if you wrote an IOU to yourself; no matter how large the IOU is it doesn’t increase your net worth.”

These balances are available to finance future benefit payments and other trust fund expenditures—but only in a bookkeeping sense. These funds are not set up to be pension funds, like the funds of private pension plans. They do not consist of real economic assets that can be drawn down in the future to fund benefits. Instead, they are claims on the Treasury that, when redeemed, will have to be financed by raising taxes, borrowing from the public, or reducing benefits or other expenditures. The existence of large trust fund balances, therefore, does not, by itself, have any impact on the Government’s ability to pay benefits.” (US Budget FY 2000)

A common sign at political rallies in coming months will declare “Hands off my Social Security”, just as it has appeared at countless past rallies. Unfortunately, “my Social Security” was already paid out to someone else. What the sign really demands is that the U.S. Government continue forcing current working generations into the Ponzi scheme in order to ensure that benefits keep getting distributed. Would it not be odd to have seen Mr. Madoff’s victims insist that others be forced into the same scheme that duped them so that they could get their expected payout?  The big difference is that Bernie Madoff deliberately hid what he was doing. The scandal would have broken long ago if participants knew its inner-workings. The Social Security Administration, on the hand, is relatively more transparent.

Among the ruins of all Ponzi schemes are a few winners and a host of losers.  The longer the scheme runs, the higher the casualty count and the more intense the pain. This is why, as far as the private sector is concerned, the United States government aggressively prosecutes Ponzi schemes and why founders of such schemes face prison sentences.  As noted above, projections show that new revenue sources will be required to sustain Social Security payouts. The Fiscal 2011 Budget identifies shifting demographics that are making the Ponzi more top heavy. It states:

Because of lower expected fertility and improved longevity, the Social Security actuaries project that the ratio of workers to Social Security beneficiaries will fall from around 3.3 currently to a little over 2 by the time most of the baby boomers have retired. From that point forward, the ratio of workers to beneficiaries is expected to continue to decline slowly. With fewer workers to pay the taxes needed to support the retired population, budgetary pressures will steadily mount without reforms.” (US Budget 2011, Analytical Perspectives, p. 47).

The following graphic, prepared by House Committee on the Budget, and based on data from the Social Security Administration (“The 2010 Annual Report of the Board of Trustees”) and Centers for Disease Control, U.S. Life Tables, illustrates Social Security’s transformation from a healthy pyramid to one that is unstable. 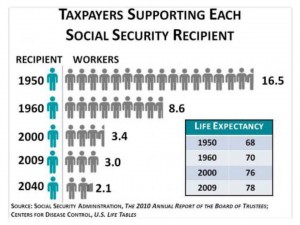 Ponzi schemes survive only as long as the base is large enough to support the top. For those close to the top, a narrowing base elicits fear.  While Bernie Madoff’s victims lost whatever they could not recover through lawsuits, the same does not have to be true of would be Social Security beneficiaries. Americans tend to be a forgiving group, especially when politicians paint images of grandma being dumped on skid row as a result of her Social Security benefits being reduced.  At the same time, no one wants to get caught holding the bag.  The Social Security log jam may begin to break loose when would be beneficiaries begin to accept, like Bernie Madoff’s victims, that they are in a precarious position: participants in a Ponzi scheme that has been exposed. This realization may help motivate real reform and give politicians the courage to grab hold of the third rail.  Social security’s survival requires that the system be transformed into something that is sustainable. That structure, if sustainable, will not look like something Bernie Madoff dreamed up.

Permanent link to this article: https://betweenthenumbers.net/2011/04/a-ponzi-scheme-to-make-bernie-madoff-blush-2/