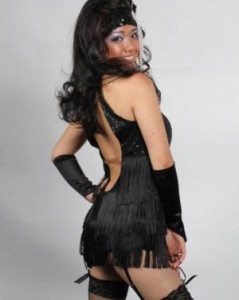 Here is the picture that Resorts Casino Hotel in Atlantic City (photo provided by Resorts) provides for what they expect of their cocktail waitresses.  Unless you look like this, don’t bother applying for their cocktail server position.  And, unless, you look like this, you might not be able to keep the cocktail waitress job that you already have.  Consequently, the Resorts Casino Hotel is the most recent casino hotel getting hit with an age and sex discrimination lawsuit.  Discrimination lawsuits are certainly not new to casino hotels, but this one grabbed more national attention.

The financially challenged hotel was recently bought for $31.5 million.  Part of the turnaround strategy is re-branding the hotel into a roaring 1920s theme that attempts to capitalize on the popular HBO series inspired by Prohibition-era Atlantic City, ‘Boardwalk Empire’.  The new owner and CEO of Resorts, Dennis Gomes,

…hopes to attract younger customers to the casino by creating an edgier, sexier atmosphere, including having cocktail servers dress up in costumes that harken back to the 1920s flapper girls.

As seen from the model photo, the costumes include short, revealing black dresses with fishnet stockings and Jazz Age hats.    The requirement to wear these new costumes allegedly cost 16 of the servers their jobs, because,

…middle-aged and older servers didn’t look sexy enough in them.

The stated reason by Resorts Casino Hotel is that these 16 servers ‘violated uniform standards’.  At least seven of the sixteen filed a lawsuit alleging age and sex discrimination.

Whether a particular policy is a BFOQ requires an analysis of the facts of each particular case.  In claiming a BFOQ, the employer has the burden of proving the discriminatory policy is valid.  The employer must demonstrate “plainly and unmistakably” that its discriminatory employment practice meets the terms and spirit of the Title VII exception because the discriminatory practice is reasonably related to an essential operation of the business. A BFOQ can be demonstrated through the use of an expert witness and related empirical data, although there is no requirement for such a formal study.

Here are some examples of possible BFOQs:

Absent a BFOQ, in most discrimination cases, statistical analyses are used to test whether the Defendant likely engaged in discrimination in making its employment decisions.  Statisticians describe independence as whether the occurrence of one event or characteristic (e.g., employee is aged over 40 years old) makes it neither more nor less probable that other events or characteristics occurs (e.g., employee was fired).  Two of the most widely-used tests for evaluating independence of variables are (i) the Fisher exact test, and (ii) the chi-square test.  Both of these tests are used by the U.S. Equal Employment Opportunity Commission (EEOC) as stated in its Compliance Manual.  A recent article describes these statistical tests in more detail.  Additionally, a chi-square interactive tool can be found here.  If no statistical relationship is found between employees’ age and whether the employees were fired or not, then Plaintiff may need to determine whether reasonable cause exists based on a BOFQ.  As noted above, the existence of the BOFQ itself can be supported by statistical evidence, surveys or other analytical methods.

Permanent link to this article: https://betweenthenumbers.net/2011/04/its-good-to-be-under-40/