IRS to use tax preparer data to identify patterns of fraud 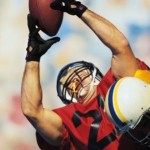 Reebok and Nike have reached a settlement in their dispute over sales of Tim Tebow merchandise.  Nike had filed suit in March, alleging that Reebok was improperly selling sporting apparel referencing the football superstar’s new team affiliation (Tebow was traded from the Denver Broncos to the New York Jets in March).

Nike asserted that it was the only company authorized to capitalize on the huge surge in demand for such merchandise that followed the trade, which occurred during a transition period of rights to sell certain licensed NFL apparel.  The Reebok deal with the NFL for players’ names apparel had expired March 1, but the Nike deal had not yet begun.  Nike quickly obtained a temporary restraining order against Reebok to stop making products with the Tebow name.  The court also ordered Reebok to tell retailers to pull the existing product from its shelves (with Reebok re-purchasing them).  The court noted that any sales would expose Reebok to liability.  Such liability and resulting damages would most likely take the economic form of (i) lost profits to Nike or (ii) disgorgement of Reebok’s profits.

Reebok has agreed to stop all production of the disputed items.  Although the settlement agreement expressly states that no costs or attorney’s fees were awarded to either side, it is not clear whether there will be any cash payment related to damages.

Permanent link to this article: https://betweenthenumbers.net/2012/04/reebok-agrees-to-pull-tebow-apparel-from-shelves-in-licensing-dispute/