At yesterday’s Oscar Academy Awards ceremony, various actors and filmmakers delivered emotional acceptance speeches littered with thanksgiving, superlatives, and mushy words. The Economist asks the whimsical question of whether the Best Actors and Actresses have progressively delivered more gushing speeches since 1972. To answer this question, the publication introduced the “gushing index”, which is calculated by measuring the frequency by which awardees used gushing words (e.g. beautiful, dream, happy, thank you, etc) as a fraction of total words contained in their acceptance speeches.

I reproduce the Economist’s chart below, which seems to indicate speeches haven’t become progressively more or less sentimental (i.e. “gushing”). 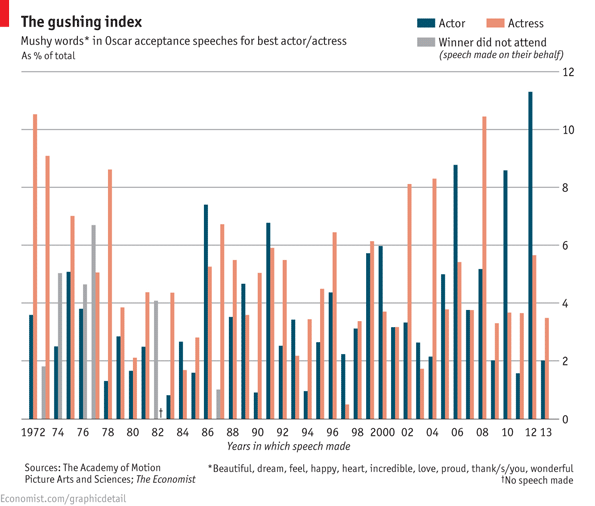 The Economist acknowledges this non-trend, but also makes an excessively bold assertion that is not supported by the data: “Overall the index does not support the thesis that America is becoming more and more treacly [overly sentimental].” Ignoring the subjectivity involved in choosing which words are considered “gushing”, this statement about America is overreaching for at least two reasons:

In spite of these challenges, we can admire this use of Natural Language Processing (NLP) as a way of gathering insight about the speeches delivered at the Oscars. However, in this instance, as well as many others, we must remain vigilant to avoid making generalizations that aren’t supported by our data.

Permanent link to this article: https://betweenthenumbers.net/2013/02/gushing-actors-gushing-americans/