Questions of Fraud and Gender

Expert Thrown Out After Claiming Major Report “Typos” on Cross

An event study captures the impact of a certain event(s) on a marketplace. This technique is most commonly used in the context of the stock market, when analysts study the effects of certain events on stock prices. Analysts look at share prices prior to the event of interest (e.g. a stock split, CEO resignation, etc.) and compare that prior trend to share prices occurring after the event.  It is commonly used in litigation to analyze the financial damage associated with wrongful publicly reported activity, such as measuring the stock price fluctuations associated with a financial restatement. However, the same principles can be applied when analyzing more innocuous events. In this second segment utilizing baby names as a marketplace, we analyze how presidential elections have impacted the popularity of corresponding names.

According to the Social Security Administration (SSA), at least 14 baby boys in the US were named “Obama” in 2008, likely in honor of President Obama’s electoral success in that same year. The world’s youngest Obamas aren’t the first babies to be named in honor of US Presidents. In fact, since Harry Truman’s presidency beginning in 1945, over 120,000 babies have been given “Presidential Names” (i.e. the last name of a current or former President). The chart below shows which Presidential Names are the most popular. Note that the analysis is limited to Presidential Names beginning with Truman, though names like Washington, Jefferson and Jackson likely also enjoy significant popularity. 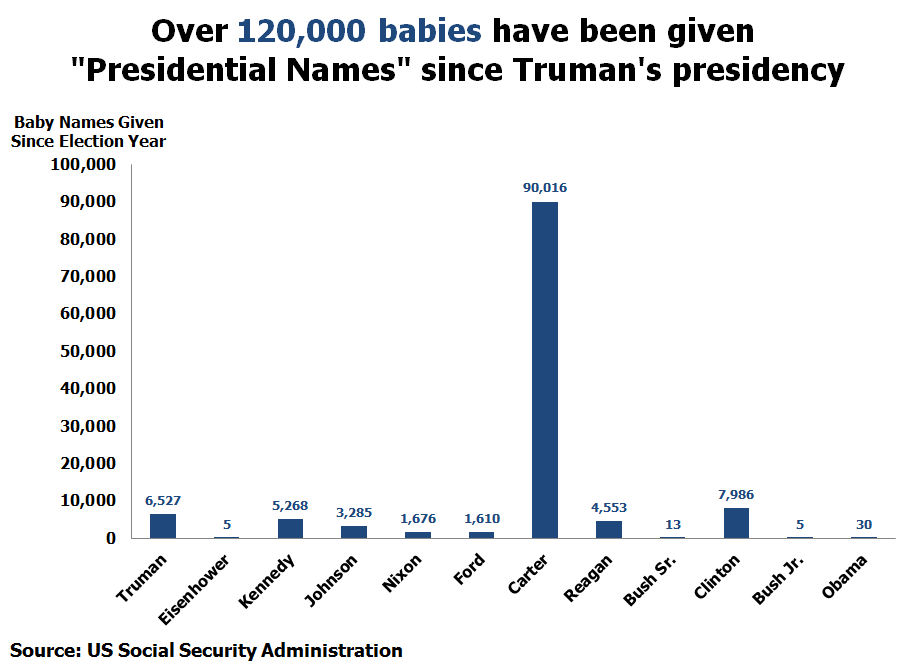 Carter is by far the most popular of those names considered above, though it is not certain whether this popularity is attributable to Jimmy Carter’s presidency. Without further analysis, we cannot conclusively determine the motivations that parents had in bestowing a Presidential Name upon their child. This uncertainty is especially strong with respect to names that aren’t unique or particular to one of our presidents. “Clinton” for example, had been given as a first name to nearly 87,600 baby boys between 1880 and Bill Clinton’s ascension to executive power in 1992. However, highly unusual first names like Obama and Eisenhower are much more likely to be related to the corresponding president. The chart below shows the average relative popularity of names (i) before the related president’s election, (ii) during the election year, and (iii) after the election. 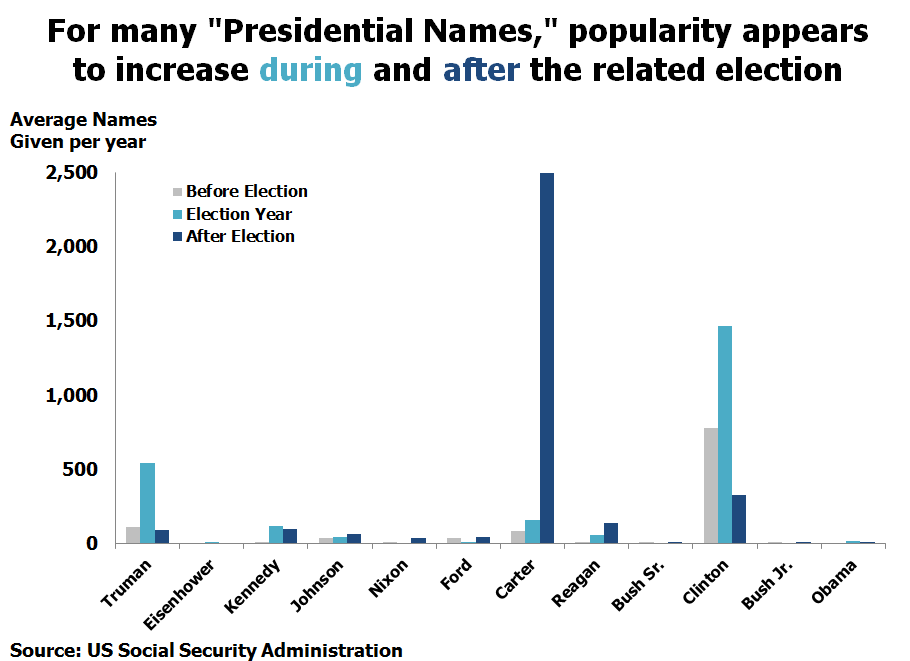 On this basis, most Presidential names enjoy greater popularity during or after their related election years, suggesting that parents may indeed be naming their children after current or former heads of state. However there is still the suspicion that relatively common names like Carter and Clinton occur independently of the similarly-named presidents and that the cumulative statistics illustrated above obscure actual trends.

An event study allows more insight by providing more detailed timing of activity.  In fact, a more detail event study of the same data (found here) demonstrates that neither elections nor presidential popularity are predictable drivers of naming behavior.  As demonstrated in the linked article, event studies can illustrate how the public reacts (or fails to react) to a specific event. Identifying and measuring such activity can similarly substantiate (or counter) a claim for economic damages.

Permanent link to this article: https://betweenthenumbers.net/2013/09/which-presidential-name-is-most-popular/