It isn’t  often that a story comes along that combines my original profession, architecture, with my current, computers.  This was one.

Steve Jobs arrived the day after Apple’s WWDC11 conference, with very short notice, at the Cupertino City Council meeting.  No surprise, they added him to the agenda.  His purpose?  To display to the city council and the world, the plans for Apple’s new world headquarters.  The new headquarters is a short distance from their current location in Cupertino, which is planned to remain open.  Having seen many other developer-comes-to-the-city-council-for-approval occurrences, this one was refreshing in that both sides knew who had the power, and it clearly was not the city council. Succinctly put:

“I think we’ve found a way to stay in Cupertino. Since we’re your largest taxpayers, we thought you’d be happy about it.”

Apple’s Need
Steve Jobs explained that the company had long ago outgrew the roughly 2800 person capacity of its current headquarters and was having to lease or buy space at an ever-increasing distance away.  In addition Jobs talked with pride about the design and materials of their stores, but that their headquarters  wasn’t living up to Apple’s current image. 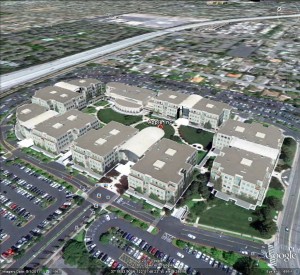 As seen in this image from Google Earth, the existing headquarters followed the ‘campus’ model that has been popular in suburban office park develoment for decades.  The early tech companies wanted to give the feel of a college campus, thinking that it was the way to stave off  ‘corporate rigidity’ and thus encourage creativity.  However, you could also confuse the design with that of a community college or a hospital.  Additionally, the design requires an ocean of surrounding parking.

The New Site
Just off-frame in the prior photograph, Apple bought a large piece of office park in 2006 and expanded it in 2010.  The location was formerly known as ‘HP Campus One’, which was a throwback to a time when HP actually manufactured electronics in Silicon Valley.
This site also featured the campus ‘office park’ style, except somewhat more haphazardly developed and with fuller landscaping.  If fully occupied, the site could hold 9500 workers.  As you might guess, none of the current building are planning to be reused.
Apple hired world famous architect Norman Foster to design the new facility.  However, when presenting the design to the City Council, Steve Jobs referenced ‘the architect’ twice and never by name.  Don’t feel bad  Mr. Foster, it comes with the territory.  The product designers who actually designed the Mac, iPod, iPhone, and iPad no doubt sympathize. 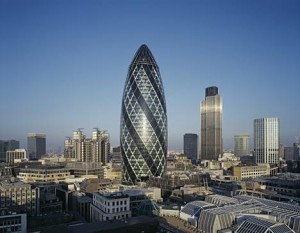 Nevertheless, I see many hints of Norman Foster’s style in the new design.  These include the monumental scale, boldness, extensive use of glass, and a pulp science fiction futurism.  However there are other elements missing, such as whimsy, pattern, and strong color as displayed in his most famous building, 30 St. Mary St. London (popularly nicknamed ‘The Gherkin’ among other things.)  Instead there is a lot of white and unbroken expanses of glass.  Very much like the minimalism of a typical Apple Store.  Maybe it was simply Norman Foster adapting to his client or Jobs imposing his aesthetic on his project.  No way to say for certain.
The Design
Which brings us to the building itself which Steve Jobs described as ‘looks a little like a space ship landed’  Actually well more than a little. 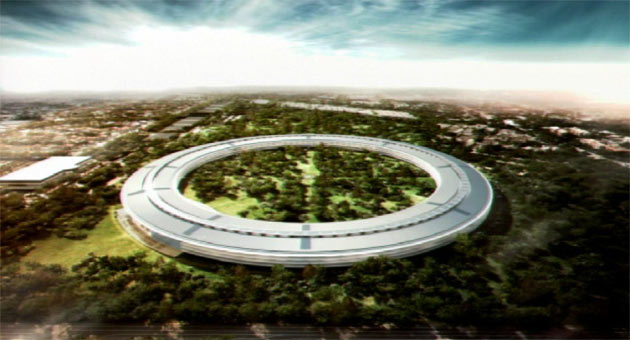 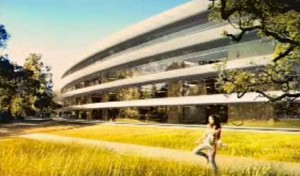 The single ring structure will hold 12 thousand employees in 3.1 million square feet.  With the exception of a parking structure along the freeway edge of the site all of the parking is moved underground, allowing  the site to be densely covered in over six thousand trees.  Steve Jobs boasted that there was not a single flat plane of glass in the building.  But, with a diameter of roughly a third of a mile, would anybody notice if there were flat panes with a tiny fraction of one degree angle from one to the next?  Jobs said that “it was not an inexpensive way to build’ which would seem to be the entire point.  This is a building to project wealth and power, rather than simply contain workers.  It is a Versailles surrounded by its gardens, except with a hall of windows rather than a hall of mirrors.  It is the castle of the king of Silicon Valley.

Except castles, in addition to their walls and courtyards, have gatehouses to welcome the subjects into the realm of the castle.  In contrast, Apple’s new structure has no gatehouse.  This is a monastic cloister in glass and enamel.  This is a fortress without an apparent entrance.  It is the Pentagon.  Actually measured by the length of the exterior perimeter it is larger than the Pentagon! 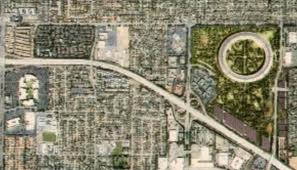 The Building and the City

During my architectural training I remember hearing over and over from professors “How does this building relate to its neighbors?” Well it is pretty clear that this building deliberately and completely relates to them in absolutely no way whatsoever.  All of those trees are a welcome infusion of nature, but it is equally clear that they are functioning as a way to shut the rest of the world from view in either in or out. For a company that often is thought to be a little to insular and cultish, this may not be the best public image or the best self-image.  It is also sad to think that it might spawn a new generation of corporate architecture focused on isolating itself.

Maybe they should go back and adjust the design to give it a focus and to remind Apple that they are supposed to be a creative and imaginative company with a sense of humor.  I suggest the following: 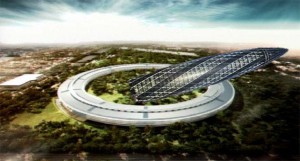 Permanent link to this article: https://betweenthenumbers.net/2011/06/eddifice-rex/