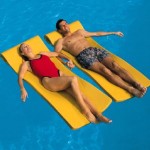 America is well known for providing its workers with less vacation time than other industrialized nations. According to a 2009 study by Mercer, more than two dozen industrialized nations require employers to offer at least four weeks of paid vacation to workers. Approximately a quarter of working Americans receive no paid time off.

Despite frequent lamentation that American workers do not receive the same generous vacation allowances enjoyed by their European counterparts, it turns out that many are not fully utilizing the vacation days they are given. According to a survey by Expedia.com, the average employed American worker received 18 vacation days in 2010, but only used 14. In contrast, French workers utilized 35 of the 37 days provided, and the British made use of 25 of their 28 days. A Reuters/lpsos poll had similar findings, with 57% of US workers using all of their vacation days, compared to 89% of French workers.

Four unused days per American represents a substantial amount of time and, by extension, money. According to CNN.com, valuing these 448 million earned but unused vacation days at an average wage of $39,208 results in $67.5 billion of foregone vacation pay. For some companies that may result in a future liability.  But for companies with a “use it or lose it” vacation policy, this can result in substantial savings.

There are a number of possible explanations for the counter-intuitive notion that people would not take full advantage of vacation days, especially those that come with an expiration date.  In the current employment environment, many employees are being asked to perform work that may have previously been delegated to multiple people. In order to accomplish their workload, they can’t spare the time. Others are trying to demonstrate their loyalty and value by showing up every day. And still others may realize that a vacation day usually costs them money, whether they travel out of town or just engage in some local entertainment like a day at the zoo with their kids.  Then there are the employers who expect their employees to check in regularly and generally be available to clients while on vacation.  In those cases, it’s sometimes just easier to be in the office.

Permanent link to this article: https://betweenthenumbers.net/2011/07/americans-missed-out-on-67-billion-vacation-in-2010/