25% Reasonable Royalty Rule is Rejected even with no Objection

I don’t know about you, but I was surprised by some of the concluding headlines and commentary.  USA Today headlined

In its write-up of its poll results, Gallup published the following two tables displaying the top ten most admired In sum, according to Gallup, of the top ten Most Admired men, four are government leaders, three are business leaders, and three are religious leaders.  Of the top ten Most Admired women, eight are government leaders and two are from television.  More than half of the Most Admired are politicians?  Really?  Candidly, a currently living politician doesn’t even enter into my top 50 Most Admired.   These results seemed odd to me; thus, I took a peak at the underlying questions and answers.  Interestingly, I find that I am not alone.  In fact, I am in the majority.

Below are the full results that practically all news agencies fail to publish, and even Gallup fails to advertise.   Rather, one has to search for the full results.  The following shows that 66% and 54% of poll respondents named either (i) a “Friend/Relative”, (ii) “Other”, or (iii) “None/No opinion” as the Most Admired man and woman of 2011 respectively.  To not be misleading , the poll’s concluding news headlines’ should have stated, “No One can claim to be the Most Admired person in 2011 – One in Three Poll Respondents Named No One to either the Most Admired Man or Most Admired Woman list”.

See our primer on creating and using survey  and articles on survey biases and survey pitfalls. 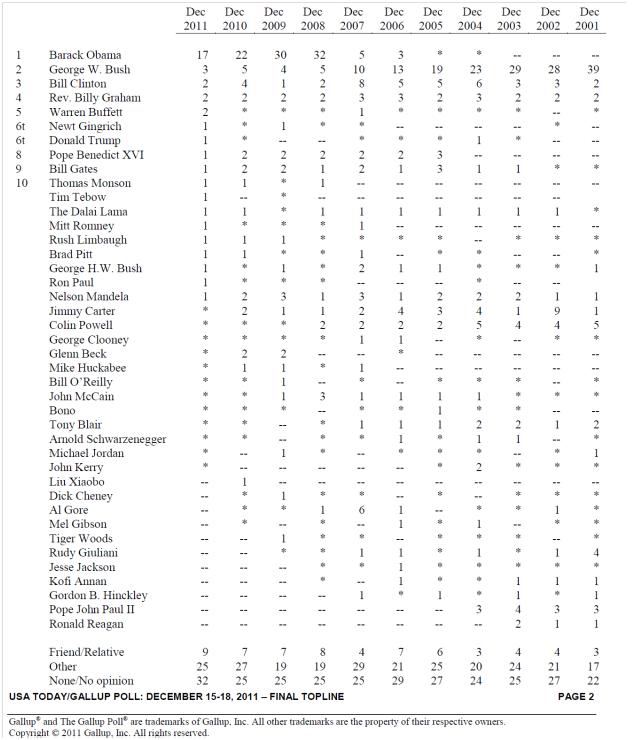 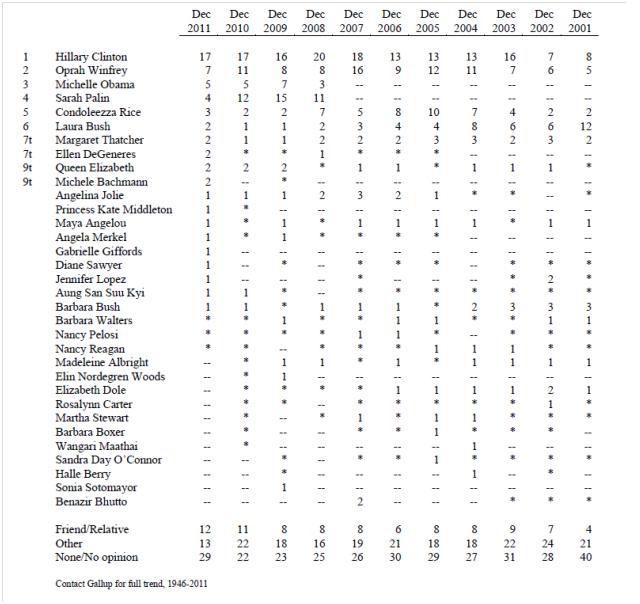 Permanent link to this article: https://betweenthenumbers.net/2012/01/misleading-survey-results-from-one-of-the-top-notch-polling-agencies/