The decline in California’s exodus fizzles out

The good news for California is that not as many of its residents are leaving the state now as they were six or seven years ago. The bad news is that the exodus continues to march onward, together with its domestic migration gap, which has remained steady over the past several years.

2006 saw the mass migration out of California reach a peak of approximately 750,000. The year before, California’s domestic migration gap, the number of people moving into the state from other states less those moving out of California, reached a peak of about 270,000. These peaks are likely explained by the red-hot housing market of 2005 and 2006 which gave California homeowners an opportunity to sell at inflated prices and relocate to another state with lower cost of living. The same high-priced housing market likely kept non-Californians from moving to the state, resulting in a massive domestic migration outflow from California.

Since that time, both of these figures have decreased substantially. According to data collected by Census.gov, about 560,000 people moved out of California to another U.S. state, down about 25% from its 2006 peak. The domestic migration gap has decreased even more, down about 65% from where it stood in 2005. 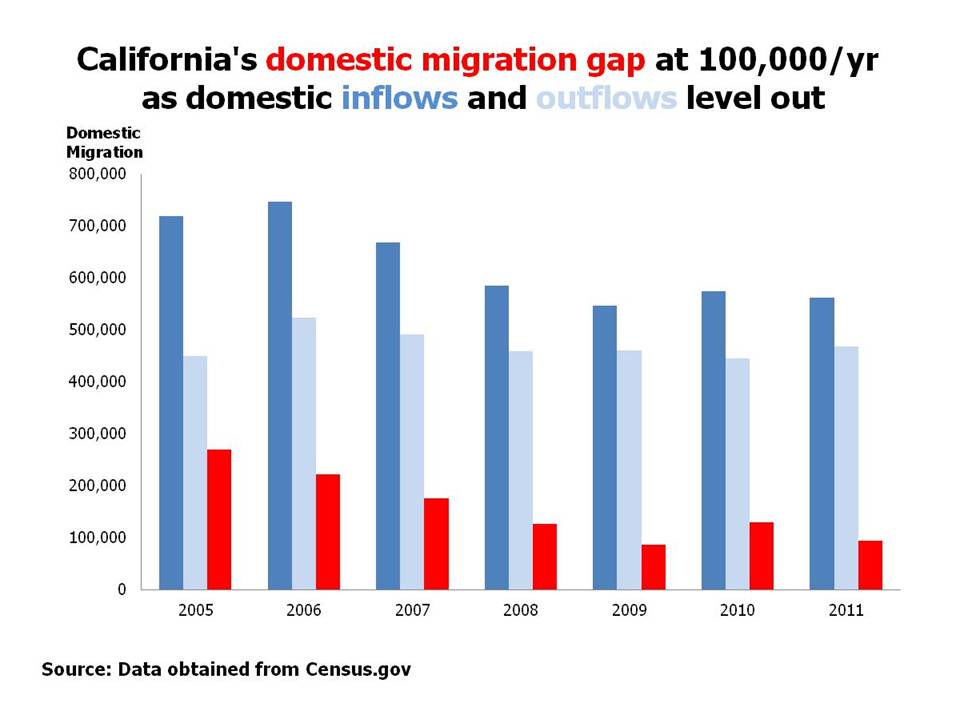 While California’s domestic migration gap represents a modest portion of its total population in any given year, the aggregate year-over-year effect is substantial. The Wall Street Journal reported in April 2012 that nearly four million more people have left the state than have come from other states over the past two decades.

Despite this domestic outflow, California has consistently filled its migration gap with new residents from abroad. For instance, last year 265,000 people moved to California from outside the United States, Washington D.C., or Puerto Rico.

Permanent link to this article: https://betweenthenumbers.net/2012/12/the-decline-in-californias-exodus-fizzles-out/