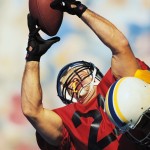 This past Sunday, the San Francisco 49ers battled their way uphill from an early 17-0 losing position and still managed to defeat the Atlanta Falcons 28 to 24 in a particularly exciting game. Now the 49ers look to steal the silver right from underneath the Baltimore Ravens’ noses in their quest for the Vince Lombardi Trophy.

Are you ready for some football?! I said, are you ready for some FOOTBALL?! If anyone should be ready, it should be the New Orleans locals. This year, Super Bowl XLVII will take place in the city of New Orleans. For Super Bowl XLVI, 1.05 million people [2] descended on Indianapolis, and a similar figure is expected to flood New Orleans. According to online journal New Orleans City Business, more than $1 billion has already been poured into the city by both private and public entities to prepare for this spectacle [1]. As if Mardi Gras and Jazz Fest, isn’t enough, New Orleans is poised to experience a significant economic surge directly related to the Super Bowl and all its surrounding hoopla.

According to Planalytics, “Direct spending from the Super Bowl [Super Bowl XLV] may have reached the $200 million to $250 million range.” [3] Since the host state of Texas was plagued by warm weather at the time, spending in New Orleans can be expected to be higher than this figure. Among the recipient of these dollars are hotels, restaurants, convenience stores, bars, taxis, airports, airlines and other travel providers, etc. For example the Indianapolis airport generated more than 1 million of sales in connection with the Super Bowl last year [4]. It should be a nice economic boon for the city of New Orleans. So put your game faces on and go spend!

Permanent link to this article: https://betweenthenumbers.net/2013/01/super-bowl-xlvii-expected-to-flood-new-orleans/