An Example of “Useless” Research that Isn’t

The author, Franz H. Messerli, examines the correlation between countries’ chocolate consumption per capita and Nobel laureates per 10 million people. The linear relationship is strong, as shown in the article’s chart reproduced below: 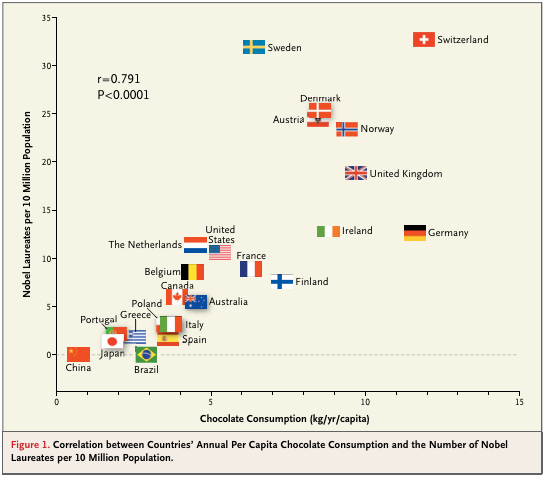 Based on this result, the author concludes:

“However, since chocolate consumption has been documented to improve cognitive function, it seems most likely that in a dose-dependent way, chocolate intake provides abundant fertile ground needed for the sprouting of Nobel laureates.”

Stripping away the plant growing imagery from the quotation above, Dr. Messerli is quite simply asserting that chocolate consumption contributes to higher Nobel laureate counts per capita across countries. Below are the top five reasons why Dr. Messerli’s conclusions aren’t supported by his analysis:

A more detailed discussion of the above five errors is described in this article.

Permanent link to this article: https://betweenthenumbers.net/2013/03/top-five-reasons-that-chocolate-doesnt-create-more-nobel-laureates-for-your-country/