From Hoops to Riches?

Forbes recently released its annual business valuations of National Basketball Association teams, concluding that most teams became much more valuable since last year (average annual growth of roughly 24%). At $1.35 billion, the LA Lakers for example, are reportedly worth 35% more today than they were a year ago. This year’s growth among all 30 NBA teams follows several years of tremendous value appreciation per the Forbes’ analysis. Since the 2011-2012 season (the period in which NBA players went on strike to demand higher salaries), some teams (e.g. Brooklyn Nets) have more than doubled in value while every team is worth at least 35% more today compared to values from two years ago. These seemingly stellar results have some people asserting (e.g. here) that owning an NBA team is a ticket to riches (or perhaps better stated as a ticket from riches to even greater wealth).

Such unbridled optimism towards NBA teams as investment opportunities needs to be tempered for at least a few reasons. To begin with, last year’s value growth for NBA teams needs to be contextualized. The U.S. stock market (as measured by the S&P 500) appreciated by over 26%, exceeding the capital appreciation reported by Forbes for NBA teams. But  in making such comparisons one should also consider the relative risk and liquidity of the respective assets. Using the risk dimension, some commentators have argued that the stock market exhibits much greater swings in value and therefore has higher investment risk. To support this point, reference is made to the chart below (excerpted from a Box Score Geeks article seen here), which traces team values reported by Forbes since the 2000-2001 season: 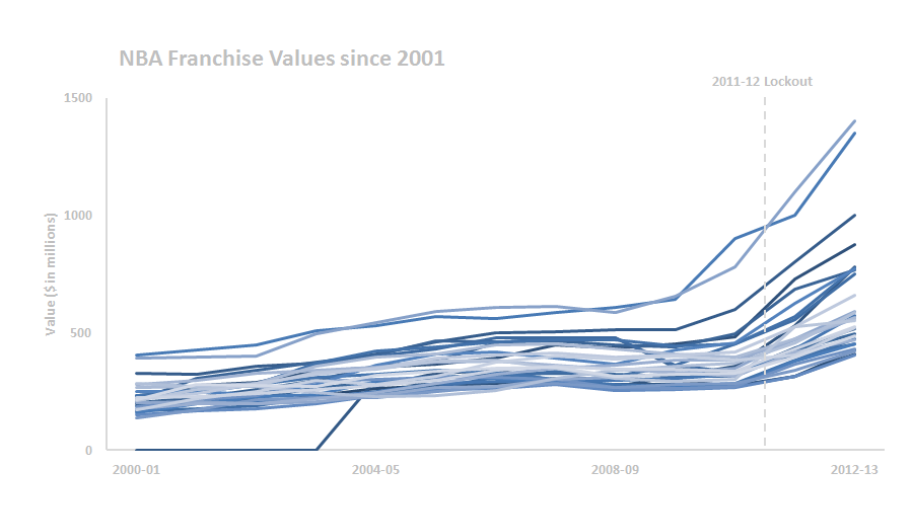 The above chart shows strong value growth and a remarkably smooth growth trend. In contrast, the S&P looks a bumpy rollercoaster during this same time period. If we simply were to compare charts, the stock market would appear to be a far riskier investment than NBA teams. Following this observation, one would conclude that the NBA team investment is far superior to the stock market in this regard. However one must also consider how the different reporting periods (annual in the Forbes reporting versus continuous in the stock market) affects the impression of volatility (i.e. risk) of an NBA team investment.  Infrequent appraisals or transactions can create a false impression of price stability.

Another comparative assessment for these investments is liquidity. There is no doubt that an NBA team is much less liquid than an ownership stake in the companies that comprise the S&P 500 and that transactions costs associated with buying and selling NBA franchises are incredibly high relative to the fees charged by a stock broker. An NBA team also falls short on diversification.  A fund which mirrors the S&P 500 is highly diversified across many different individual investments, while an NBA team offers no diversification.

Even if we ignore the risk-return critiques above, there is another factor that needs to be considered. Forbes reports a value for each team that includes the value of the team’s debt (i.e. total enterprise value or “TEV”). Increases in a company or team’s TEV don’t necessarily equate to increases in value for shareholders (i.e. value of equity). As an illustration, if my lemonade stand, which let’s say has no debt and is worth $20, decides to take on $100 in debt financing, am I richer as the enterprise’s shareholder? No, because I have also increased my firm’s liabilities by $100 and therefore I am no richer or poorer than I was before the debt was obtained. Similarly, just comparing NBA teams’ TEVs over time does not reflect pure appreciation in shareholder equity.

Permanent link to this article: https://betweenthenumbers.net/2014/01/from-hoops-to-riches/