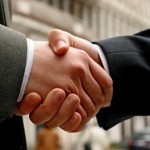 On August 15th, Google announced its largest acquisition ever, the purchase of Motorola Mobility for approximately $12.5 billion dollars. The $40 per share all cash price represents a 63.5% bonus over the prior week’s close.

Earlier this year, Motorola divided itself into the commercial oriented ‘Solutions’ company and the consumer oriented “Mobility” company  in what was effectively a substantial negative stock split (while selling off the cellular network equipment business to Nokia Siemens for $1.2 billion).  Shareholders were given one share of Professional Solutions for every seven shares held and one share of Mobility for every eight shares held.  At that time Motorola as a whole had a market value of $9.7 billion dollars.

One might wonder why Google would do this deal with Motorola, as Motorola is not the largest vendor of Android Smartphones.  Such a move could cause the other smartphone vendors to be concerned that Motorola would have preferred access to new Android features and cause them to perhaps look elsewhere.  However the largest makers of smartphones such as Samsung and HTC promptly came out in favor of it.  The speed of their endorsement would suggest that Google had already gotten them on board ahead of time.

The deal is most likely tied to Google’s lost bid for the patents of the former telecommunications giant Nortel.  As a result, Google has little leverage against Microsoft’s claims that Android smartphone vendors needed to pay a license fee to Microsoft to cover certain features that are part of Android (see this related post for more details).  By purchasing Motorola, Google gets ownership of Motorola’s patent library and has some leverage in negotiating a cross-licensing deal with Microsoft.  Some insiders report that Microsoft was competing in negotiations with Motorola Mobility to buy the company.

So having bought Motorola Mobility for the patent library, what will Google do with the remainder?  Google CEO Larry Page has said that they will operate Motorola Mobility as a separate company.  If that occurs, it might signal a future sale or spinoff (minus those precious patents).

Permanent link to this article: https://betweenthenumbers.net/2011/08/motoroogle/