Apple and Samsung have been fighting it out in courts around the world over Samsung’s Galaxy Tab 10.1 tablet.  Recently Apple scored big in the dispute when it got a preliminary injunction against Samsung selling the Galaxy Tab 10.1 across most of Europe.  The ruling was principally based on the idea that the Galaxy Tab was a copycat design.  Samsung’s full defense was filed under seal and is unavailable, but many of the declarations and exhibits are not.  Among the more interesting is the following image and declaration:

Attached hereto as Exhibit D is a true and correct copy of a still image taken from Stanley Kubrick’s 1968 film “2001: A Space Odyssey.” In a clip from that film lasting about one minute, two astronauts are eating and at the same time using personal tablet computers. The clip can be downloaded online at http://www.youtube.com/watch?v=JQ8pQVDyaLo. As with the design claimed by the D’889 Patent, the tablet disclosed in the clip has an overall rectangular shape with a dominant display screen, narrow borders, a predominately flat front surface, a flat back surface (which is evident because the tablets are lying flat on the table’s surface), and a thin form factor. 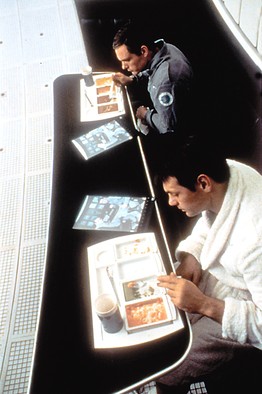 Now before you get all amazed at how prescient Kubrick was, note that he was almost a full decade early on the release date!

Moreover, it wasn’t only Stanely Kubrick who foresaw the touchscreen tablet computer.  Take a look at what is in Captain Piccard’s hands:

In case you are thinking that the size and shape of the device doesn’t really show what they thought the device was or what it would be used for, you might want to look at this clip:

It seems the only thing missing from the Star Trek TNG clips is the Apple Logo, but that could just be their way of saying watch out when investing for really long term in any company!

The same German court has also blocked Samsung from marketing the Galaxy Tab 7.7 as well.  This court is apparently interpreting Apples ‘ownership’ of the tablet computer very broadly.

Permanent link to this article: https://betweenthenumbers.net/2011/08/stanley-kubrick-invented-the-ipad/