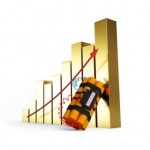 Late on Friday, August 5th, Standard and Poor’s changed their rating on long term US government debt from AAA to AA+.  The move puts S&P in disagreement with Moody’s, which had reaffirmed their highest rating for the US shortly after the debt ceiling deal.  It also occurred despite the administration’s position that there was a trillion dollar error in S&P’s estimate of future revenues.  Neither of these factors diverted S&P from the path that it signaled on July 14th when it placed both the short and long term ratings on Credit Watch.

The S&P press release seems to indicate that the reason it was undeterred by either Moody’s position or a possible trillion dollar adjustment to its forecasts was that they were not downgrading the US finances so much as they were downgrading the US government’s ability to deal with what lies ahead:

“We lowered our long-term rating on the U.S. because we believe that the prolonged controversy over raising the statutory debt ceiling and the related fiscal policy debate indicate that further near-term progress containing the growth in public spending, especially on entitlements, or on reaching an agreement on raising revenues is less likely than we previously assumed and will remain a contentious and fitful process. We also believe that the fiscal consolidation plan that Congress and the Administration agreed to this week falls short of the amount that we believe is necessary to stabilize the general government debt burden by the middle of the decade.”

The political brinkmanship of recent months highlights what we see as America’s governance and policymaking becoming less stable, less effective, and less predictable than what we previously believed. The statutory debt ceiling and the threat of default have become political bargaining chips in the debate over fiscal policy. Despite this year’s wide-ranging debate, in our view, the differences between political parties have proven to be extraordinarily difficult to bridge, and, as we see it, the resulting agreement fell well short of the comprehensive fiscal consolidation program that some proponents had envisaged until quite recently. Republicans and Democrats have only been able to agree to relatively modest savings on discretionary spending while delegating to the Select Committee decisions on more comprehensive measures. It appears that for now, new revenues have dropped down on the menu of policy options. In addition, the plan envisions only minor policy changes on Medicare and little change in other entitlements, the containment of which we and most other independent observers regard as key to long-term fiscal sustainability.

So S&P is similarly critical of the failure of the entitlement changes which the Democrats took ‘off the table’, and the revenue increases which the Republicans took off the same table, leaving a table with too little of anything left.  But mainly S&P was alarmed by the stategy of government-by-hostage-taking.  And in the last year we have had no fewer than three intentional financial hostage crises.  There was (i) the expiration of the tax cuts hostage crisis, (ii) the government shutdown hostage crisis, and now, (iii) the debt limit hostage crisis.  And did any of them result in a sensibly crafted response?  What does one really expect when negotiating in a hostage crisis?

Furthermore, the debt limit deal has no fewer than three additional opportunities for further brinkmanship.  There is (i) the Thanksgiving deadline for the super-committee to reach an agreement on further debt reduction, followed shortly thereafter by (ii) the up or down vote to pass the super-committee, and then (iii) a possible lame-duck session attempt to modify the consequences before they go into effect in 2013.

Then in early 2013 comes the need for another debt limit increase!

So perhaps S&P’s focus is right.  If you hold US bonds for the medium to long term there is no risk that the US will actually go bankrupt.  Putting aside the risk of inflation, the Treasury can print the money to pay you.  The real risk of not being paid is that a Congress overly comfortable with dancing on the brink with the full faith and credit will at some point stumble in their choreography and fall over the edge.  The flippant attitude displayed by some on Capitol Hill over the possibility of failing to increase the limit makes that more plausible than it has ever been before.

For those claiming that the real problem is the debt and not the debt limit deal, S&P stated focus isn’t the debt itself, but the political will to control the trajectory:

When comparing the U.S. to sovereigns with ‘AAA’ long-term ratings that we view as relevant peers–Canada, France, Germany, and the U.K.–we also observe, based on our base case scenarios for each, that the trajectory of the U.S.’s net public debt is diverging from the others. Including the U.S., we estimate that these five sovereigns will have net general government debt to GDP ratios this year ranging from 34% (Canada) to 80% (the U.K.), with the U.S. debt burden at 74%. By 2015, we project that their net public debt to GDP ratios will range between 30% (lowest, Canada) and 83% (highest, France), with the U.S. debt burden at 79%. However, in contrast with the U.S., we project that the net public debt burdens of these other sovereigns will begin to decline, either before or by 2015.

S&P is effectively saying that if you want a AAA rating you must have a AAA government, and the current occupants do not qualify:

Our opinion is that elected officials remain wary of tackling the structural issues required to effectively address the rising U.S. public debt burden in a manner consistent with a ‘AAA’ rating and with ‘AAA’ rated sovereign peers.

Looking forward, S&P discusses a possible further reduction to the AA rather than a restoration to AAA.  But they offer specifics about how to avoid that further decline:

The outlook on the long-term rating is negative. As our downside alternate fiscal scenario illustrates, a higher public debt trajectory than we currently assume could lead us to lower the long-term rating again. On the other hand, as our upside scenario highlights, if the recommendations of the Congressional Joint Select Committee on Deficit Reduction–independently or coupled with other initiatives, such as the lapsing of the 2001 and 2003 tax cuts for high earners–lead to fiscal consolidation measures beyond the minimum mandated, and we believe they are likely to slow the deterioration of the government’s debt dynamics, the long-term rating could stabilize at ‘AA+’.

In an Aug. 1st CNN poll, Americans were asked if they felt that elected officials in Washington had behaved on the debt deal like ‘responsible adults’ or ‘spoiled children’.  Seventy seven percent described them as ‘spoiled children’.  Standard and Poor apparently agrees.  And they have a more powerful tool to express it.

Permanent link to this article: https://betweenthenumbers.net/2011/08/what-did-sp-actually-downgrade-2/